However, I don’t hate the idea of organically introducing extended range guitars. Because of that, I decided to dig around the entry-level market. I ran across the Ibanez RG8, the Schecter C-8, and then the Dean 850x (you are so creative, Mr. Guitar Naming Guys).

Wait, huh? Dean makes an 8-string? I know, weird right? Even more weird is how not-cheap this guitar looks in the pictures. I dug around online but had trouble finding much more than this …colorful… official Dean demo. Seriously, go watch it if you need a good laugh.

Still, the Dean kept catching my eye. I love Ibanez’s SR bass series, but never really got into their guitar lines. I owned a Schecter Omen 7-string briefly and it wasn’t bad, but didn’t hook me either. So, knowing that I’d be changing the pickups regardless, I decided to go out on a limb and give the Dean a shot.

Where The Dean 850x Shines

The construction (when assembled properly) feels incredibly sturdy. The frets are properly filed and the overall feel is extremely comfortable, more-so in my opinion than the Ibanez RG8, which I’ve briefly sat with.

The neck is amazingly thin, which is a plus or a minus depending on your preferences. The lack of material definitely helps with reach on a fingerboard this wide.

The binding and arch top are nice touches on an otherwise extremely base-level guitar. The recessed neck bolts and deep cutaway make for easy access to higher frets. The pots are smooth and the electronics seem like they’ll hold up to some abuse.

If you just want to jam out and record demos, the stock pickups will suffice (more on that in a bit). We’ll call that a positive, I suppose.

Where it Falls Short

With a short 26-1/2″ scale neck, you’d think there would be some flab to the 7th & 8th strings…and you’d be right. It’s not as bad as you might think, though. Thankfully, a bump in string gauge to something like the D’Addario EXL140-8‘s will solve that issue.

The maple neck feels unfinished, and not in a good way. Sure, you don’t stick to it like you do a painted neck, but the slight roughness is distracting.

The pickups…dear lord the pickups. They’re either lifeless or screeching. The output is so low that you have to crank the gain to get any tone out of them. Problem is, that causes them to feedback like a mutha! With enough tweaking, a tube screamer pedal, and noise gates at several points, I was able to get a tolerable tone. Another odd thing — I recorded a dry signal for re-amping and while listening back I kept thinking I had a compressor on the track causing a volume swell, but it turns out that the lower strings overload the pickups when playing chords, reducing the volume of the other strings briefly. That was a new one to me, for sure.

I’ve already purchased DiMarzio D-Activators (DP819 and DP820), so that will hopefully be a problem of the past once those are in.

BUYER BEWARE: I had to send the first one back for replacement because the neck was horribly misaligned and warped. I have no idea how it got by Dean quality control (is there such a thing?), but since my replacement was just fine, I’m really hoping that it was just a fluke. 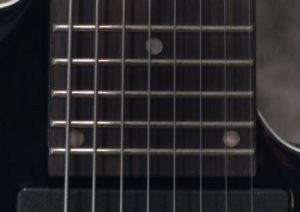 Somehow this made it past quality control.

Where it Gets Weird

Quality control aside, I have a lot of praises for this guitar. Still, I really feel that there’s something…off about this model. Not from a product standpoint, but due to it’s lack of recognition from Dean itself. Check out this link, where it’s actually listed as a discontinued model. In fact, this is the only page on the site that mentions the guitar, and you can’t get to it unless you Google search their site. This makes no sense, since it’s still widely available through many online retailers.

Not that Dean’s website is anything to jump about, but the lack of mention leads me to believe that this is either a discontinued model that they made way too many of (which would explain why it’s still for sale), or they don’t want to recognize it as a real Dean due to the entry-level status. The latter seems silly, but who knows.

Either way, I still say that if you can get your hands on a properly-assembled model, this guitar will probably hold up throughout the entire duration of this silly extended range craze. I’d recommend the 850x to anyone on the fence about extended range guitars, anyone on a serious budget, or anyone that just needs to reach some extra low notes on occasion. This far from a high quality instrument, but with enough tweaking it’ll get the job done.

Get the Dean 850x on Musician’s Friend

My Review and Demo of The 850x on YouTube

Woo! More Gear! is a web series reviewing and demo’ing instruments and music-related gear for gearaholics like me. If there is a particular piece of gear or gear type that you’d like to see on WMG, let me know.