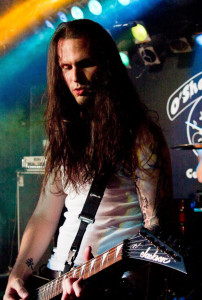 Hi, my name is Chad. I’m a multi-instrumentalist with over 2 decades of music creation & production experience, and in 2014 it hit me — I have a fair amount of knowledge that could help new and aspiring DIY musicians, and I also have an internet development/marketing background and know-how to present it in a format that’s easy to understand and apply, which is where most amateur bloggers and educators fall flat on their faces.

So after countless hours of research, planning, content creation, I launched chadedwardmusic.com on June 1st, 2014 as a resource for all things music production and promotion. I really do hope you find the information on this site super useful, and I’d love some feedback. If you see something on this site that helps you out, return the favor by commenting on my posts and videos to let me know that you’re out there. 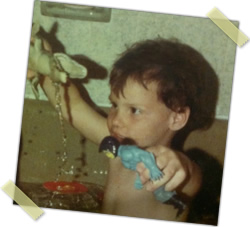 I grew up in a family full of musicians. We were pretty poor, but when I was 13 my mother scraped together enough money to generously purchase my first guitar and practice amp as a Christmas gift. That Christmas morning rocked on so many levels!

I took lessons for a while and developed a basic understanding of music theory. I started a semi-intelligent tech-death metal band…as intelligent as a 16-year-old can be. That genre took all of a year to bore me to tears. To fill the void, I played guitar for my brother’s classically-inspired goth band (lol!) as well as a funk-metal band (wtf?!), where I handled bass duties. Both were awesome experiences that expanded my pallette.

I eventually headed for the big city…well, bigger city – Columbus, Ohio (a.k.a. Cowtown). I gained an interest in electronic music and began experimenting with any hardware or software synths I could get my hands on, hell bent on integrating it heavily into any music I wrote. I didn’t let it rule my music, though. I’m a guitarist through-and-through.

The 2000’s decade was a blast. Several bands, tons of shows, a few good-sized album releases…all great experiences. This is where I also became obsessed with music production on a budget. I wanted that polished studio sound without the studio cost. I tore into every piece of recording equipment and software while building a wealth of production knowledge through research and trial & error. Did I go to Berklee? No. Does my work sound really damn good? I like to think so. You be the judge.

In late 2010, vocalist Jeremy Payton and I scrapped almost all previous work and formed Skekzi along with a few other members that have come and gone. This band is my baby. I took the reigns on writing, recording, producing, marketing, and managing Skekzi to keep things as focused as possible. After taking a 2 year hiatus to focus on some business opportunities, we’re gearing back up for a new album and tour in 2016.

Thank you for being here

You’d be shocked at how many people browse through my site, grab some knowledge, and never even mention that they stopped in. So please, don’t forget to drop me a line or leave a comment to let me know you were here. Thanks again.